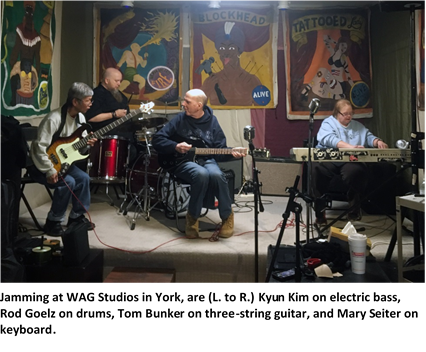 Responding to several individuals’ keen interest in music, Penn-Mar DSP and Community Learning Services (CLS) Instructor Rosanna DiSebastiano has recently introduced music therapy into the CLS program and partnered with the Weary Arts Group (WAG), the performing arts school that is dedicated to the promotion of artists and arts education in York, Pa., and beyond.
Not only are Penn-Mar’s CLS groups getting to exercise their green thumbs through the Garden Project “Seeding Transformation,” which Rosanna initiated last year, they have also begun discovering their inner rock stars through a collaboration Rosanna established with musician and educator Rod Goelz, who heads the music program at WAG, which was founded by Calvin Weary. Penn-Mar’s CLS program promotes partnerships, community inclusion and opportunities for connected and authentic learning, where real-world experiences are lived and engagement with the community is a possibility.

Through three degrees of separation – a friend of a friend connected Rosanna with Rod and WAG – the Music and Wellness program has taken off in a way that is inspiring everyone involved. Two groups of four alternate attendance every other week.

“My primary motivation and inspiration for starting this class was one of the fellows in my group, Tom Bunker,” said Rosanna. “It broke my heart when I learned that he couldn’t afford his guitar lessons anymore. He doesn’t talk a lot, but he loves to sing. Music is his soul.”

The class, developed by Rod, involves everyone getting the opportunity to play a different instrument, singing, and movement and dance. The groups also use their bodies as instruments, Rosanna explained, by tapping on their legs to learn about rhythm, for example.

“Rosanna is forward thinking and was looking for someone to design a program that would meet the needs of the individuals she works with,” said Rod, a Grammy nominated music educator, who has been a professional musician for the past 29 years. He attended Berklee College of Music in Boston, and earned a bachelor’s in Music Industry Studies from Millersville University. 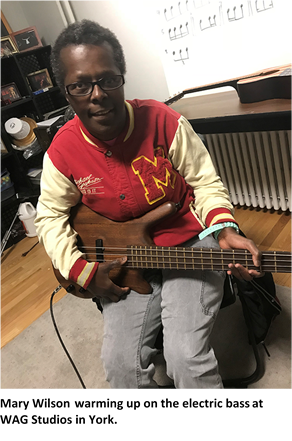 Rod combines teaching and experiential learning in his classes, and gives the groups a chance to have a rock band experience, where one is playing the guitar, one is on bass, and the other is on keyboards.

“Everybody has a part to play,” said Rod, who works with other nonprofits and teaches in schools. “It’s an energy and wellness experience for the individuals. It’s very therapeutic, and everyone is really interested in exploring music in a way that removes fear and hesitancy. Music transcends everything.”

The response from the individuals has been wonderful, noted Rod. Rosanna couldn’t agree more.